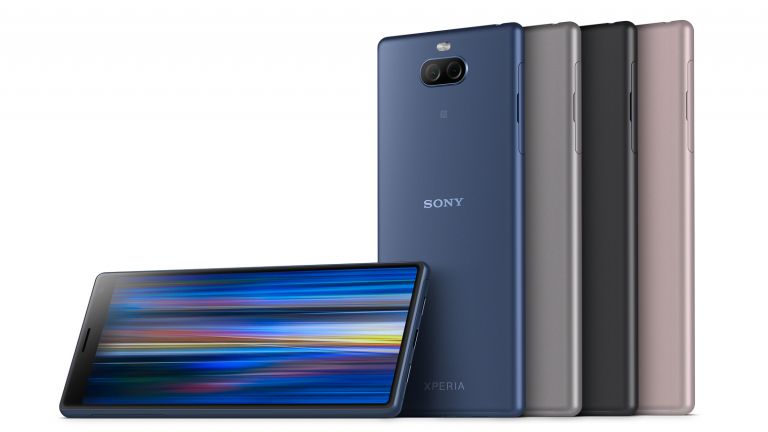 The Sony Xperia 10 looks solid and feels premium too. On the front, there is a glass panel while on the rear, you get metallic touch which makes it feel solid and strong. The device is also very light- 162g only. Also, it measures156 x 68 x 8.4 mm which makes it solid and thin. The phone is not for the one-handed people, so it will be struggling to reach the top of the display. It also comes with Corning Gorilla Glass 5 for durability. You can easily buy this phone using Amazon Promo Code with great deals.

On the back metallic panel, there is a dual horizontal rear camera bumping out with Sony branding in the middle. On the right, you get a fingerprint sensor, volume buttons, and a power key. The keys are kept low which makes it easy for users to click and reach the keys. The fingerprint sensor is pretty fast and can unlock your device just in a second and this new technique- placing the sensor right- makes the back look subtle.

On the top, you get a 3.5mm headphone jack while on the bottom, there is a USB-C port and dual speaker grille. The device feels premium and a perfect design for mid-range pieces.

Coming to the display, Sony Xperia 10 packs a big 6-inch Full HD+ display with 21:9 aspect ratio. The screen isn’t as good as Xperia 1 but still, it is great to watch movies on it. As the device is a mid-range piece, that’s why it does not get a premium screen like Sony Xperia 1. There is no notch on the device which makes it like conventional phones which you used to see before. As per Sony, 70% on the films on Netflix, Amazon, and Hulu are for 21:9 aspect ratio. That’s why they kept the screen size perfect for watching movies.

Under the hood, the Xperia 10 has an octa-core Qualcomm Snapdragon 636 chipset coupled with 3GB of RAM and 64GB internal storage. The internal storage can be further expanded up to 512GB via a microSD card. The device’s performance is not too good but average. The device is a little slow but it is good enough for daily tasking. Still, there are times when this phone gets slow and apps get crashed. Moreover, many other cheaper phones run better than this device. On the Geekbench 4, Xperia 10 scored around 3,978 which is good for day-to-day tasks.

When it comes to gaming, the games run smooth but they don’t look good. High-end games don’t run smoothly in this phone and games like Asphalt 9 and Fortnite are still not supported by Xperia 10. So, the gaming experience in this device is just satisfactory. Sony Xperia 10 has a dual speaker having Qualcomm aptX HD audio and SmartAmplifier. The sound comes out loud and clears which is soothing and touching to ears.

Coming to the cameras, the Sony Xperia 10 packs a dual horizontal rear camera including 13MP with f/2.0 aperture 76.4° wide-angle primary lens and 5MP with f/2.4 aperture secondary camera. For selfies, you get an 8MP selfie camera. As per money, the cameras are really good as the captures come out with nice details and colors. The device performed really well in day lighting but in low lighting conditions, Xperia 10 lacks its luster- little disappointing. In terms of camera, various options available in the market and one can buy those using Flipkart Offers at discounted prices.

The Sony Xperia 10 houses a medium sized 2870mAh battery which is very disappointing by the company. At the end of the device, you might need to refuel Xperia 10. On the typical usage, you might need to charge the phone in the night still. The device also supports fast charging technology which charges phone faster but still, there is no wireless charging in it.

In the tough mid-range smartphone market, it is really difficult for Sony Xperia 10 to compete with other devices. The device does a fine job but lacks behind from other devices like Moto G7 Plus, Honor 10 and Realme 3. The device gets a unique display, and the screen is really hood with solid build quality but the disappointing battery and performance make the phone dull. So, overall, Sony Xperia 10 is perfect for binge-watching TV shows or movies and an “okay” device overall.

Previous Post How To Connect Your TV And Phone